I actually have been busy with a lot lately, so forgive me for not getting pictures up sooner.  First, just a teaser photo of my friend, Aaron’s, “self-building” project, based on the Cato Sicarius model. 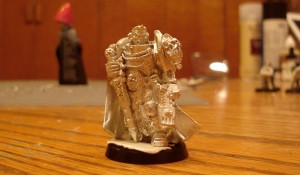 My own project and my brother’s are both coming along well, too.  Here’s a peak of a planning drawing: 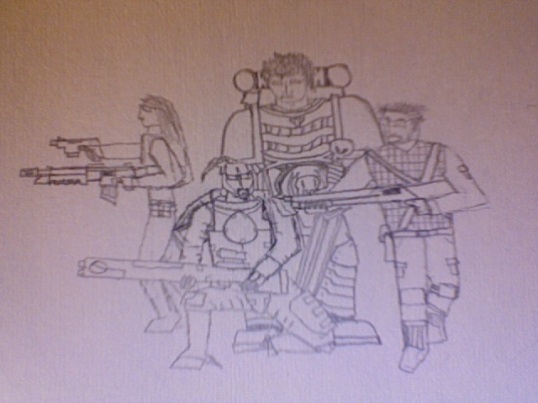 Next, a few weeks ago I built the Space Marines from the Assault on Black Reach set, and Aaron built the Orks from it; I just forgot to post some pictures.  There’s still plenty to be done – most notably basing and painting – but here are some shots.

On the Marines side of things, I acquired a large number of Scouts, including two Sergeant Naaman models.  I never really liked the original pose of Naaman, so on the first I cut the sword and repositioned it so the teeth were down (instead of behind); on the second I gave him a plasma pistol and put the sword in his other hand.  I’m pretty pleased with the outcome. 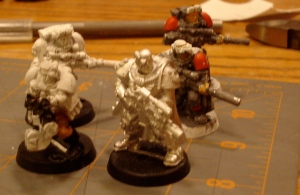 I also acquired some more Guardsmen, most spectacularly some crew for my Heavy Mortar unit.  Also in the picture are two models I “converted” a bit ago – two more tank riders made into ground pounding Guardsmen. 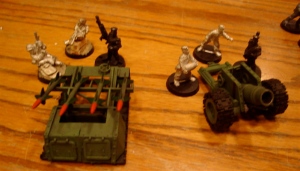 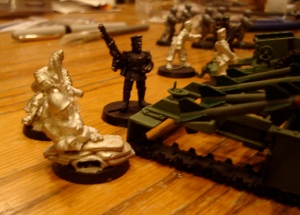 Still left on the chopping block: myself, my brother’s self-build, another friend’s self-build; 3 Deffkoptas, 1 leader Nob, 1 looted Rhino, and maybe a surprise or two around the corner…

Why reinvent the wheel? Maybe next time I can do a search on what I’m constructing.

(Both links open in a new window.)

In fact, they solved some other questions I had on them. So there you go. Thank you, Ian, for pointing out that I’m a twit. :)

I’m currently in the middle of building my first drop pod. While I will have a step-by-step post in the next couple weeks, I thought I’d drop some hints for those of you that can’t/won’t wait.

1. Side cutters are your friend. Hey, I normally don’t use ’em, but in this case, I wish I did. Some pieces are thin, and break more easily than in other kits. Use side cutters.

2. Beware of the glue. With the way the pieces fit, glue slips out a lot. My thumb and forefinger are now silky smooth because of a couple of mishaps. Be careful.

3. HARNESSES GO ON A SPECIFIC WAY!!!11!one! Now, I’m not dumb, (I hope.) but as I was eagerly putting this whole thing together, I realized, too late of course, that i had messed up and put one set of harnesses on the wrong way. Don’t make the same mistake I did.

These three are all I have for now… I’ve still got the “tent poles” and engine to put on, but unless there’s a big screw up there, I’ll save it for the full post. Cheers!

Okay. The tent poles were kind of a screw up. My advice? Bring a friend to help you. What a pain.

Well, of course I know people are out there, but the question is where? Ian and I were talking about it, and we may well run a campaign if anyone is interested. Thusly, if you live near Milwaukee or East Central Indiana, leave a comment here, and we’ll work out how we’re going to do things.

Also, since so much of my traffic comes from BFG searches, if you’re near Milwaukee and want to play BFG, I can dust off my rulebook and try to find all the pieces to my ships.

Of course, if there is no interest, we won’t bother, but if there is…

The campaign would take place in two different systems. Once we have played it for awhile and have built up forces on both sides, we may try to find a place to meet in the middle, and play an apocalypse game. Everything would be posted here, to people informed and hopefully draw more interest. The more the merrier, right?

P.S. Don’t forget to see Ian’s “contest,” as well as all the work he’s done over the summer. Stay tuned for more!

Q: What is there to win?

Q: What makes it a contest?

So here is my early entry. I figure, if I were a space marine, this is me. Totally. Have you ever had that day at work where you feel like you have to do everything yourself? Happens to me all the time. So I thought, what marine can do everything himself? Presto!

Yes, that is a Dreadnought heavy flamer on a powerfist. Yes, he is holding a plasma gun. And yes, he has a combat knife between his teeth. I like to be prepared. In addition to this, he’s going to have a jump pack.

Anyway, this was mostly to see if I could pull it off. Yes, yes I can. I’ll be doing some bitz shopping to make an actual entry, and hopefully I’ll have it in before the deadline. If anyone out there has anything that looks like a hoodie, (Or a ‘hooded sweatshirt’ for those of you who may not be familiar with the colloquialism) let me know. I’ll happily purchase some bitz from you. :)

See the post below for the “rules” and don’t forget to build! We wanna see you in a game!

After seeing the Bell of Lost Soul’s post about GW’s Halloween “Streets of the Dead” activity ( http://belloflostsouls.blogspot.com/2008/11/battle-report-streets-of-dead.html ), I feel particularly inspired to build a miniature of myself for similar games.  In order to force myself to get this project done, I am going to invite all of our readers, young and old, to participate in an “Andy’s Blog Contest.”  The following are the basic rules of which I’ve thought.  “Entrants” may submit;

(a) any pictures of a single, non-vehicle model

(c) that represents the creators persona in some facet.

(d) Entries should be submitted before January 1st, 2009, and

(e) equipment-load out should be legal under some army list***.

( *: if you are a Tyranid Monstrous Creature, Greater Daemon, or C’Tan, please use some manner of possession to incorporate your personage into an approximately humanoid form/size.  Bikes, cavalry, jet packs, Crisis suits, and so forth are acceptable.  **: for at least this first contest I’d like to keep it in the realm of Warhammer 40,000, staying away from WFB, LOTR, etc.  Necromunda would be fine, but let’s not do BFG, except officers on board, etc.  Use your imagination, but keep it within the 28mm 40k universe.  ***: this is meant as a more loose restriction than it might initially seem, but I’d like to stay away from battlecannons or three two-handed weapons, etc.) [Andy Says: Feel free to ignore this one. I know I will. :)]

Submissions will be posted on the blog and, who knows, there might be a winner and that winner might receive something, maybe.  But above all, have fun.  Comment here and we’ll e-mail you to that unpublished address you provide.

This isn’t my entry (but he might be closely related…), so just for inspiration:

So after getting Assault on Black Reach, and finding a nice gaming club nearby, it has become pressing for me to not only continue on painting the Guard when I can find the time but also to re-do my Space Marines. Here is a sneak peak on the color scheme/chapter I will be fixing them up as: 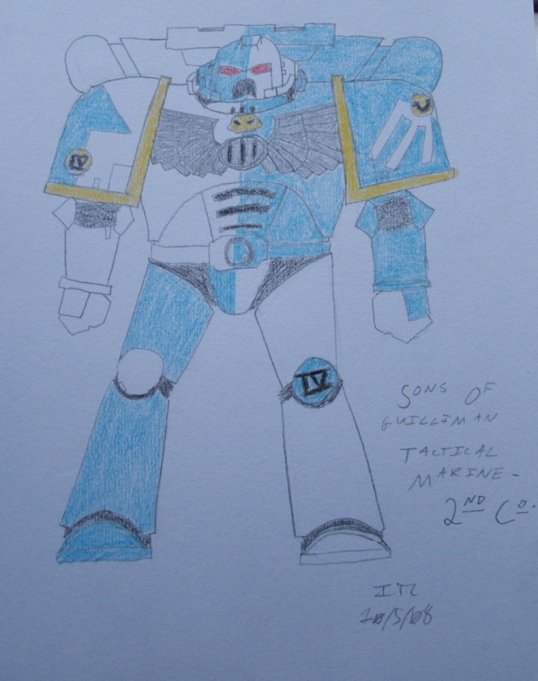 Joel’s been at work…

What’s that dynamic, unpainted model in the front? None other than the Decapitator himself, of course… 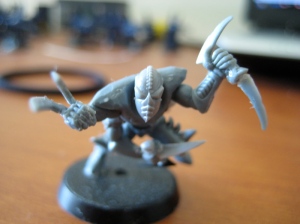 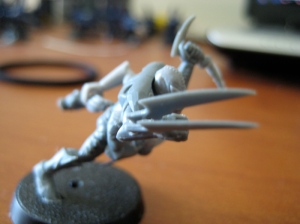 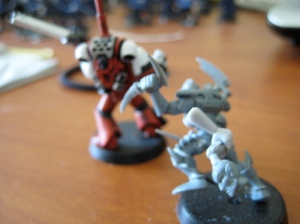 You may remember the Shadow of the Kabal of the Twilight Wraith, a Dark Eldar army by my friend Joel Williams that we posted a gallery of a while back. You may, too, remember the mention of a discussion Joel and I have often held: I, as an upstanding defender of the Imperium, see the wicked xeno pirates as one of the cruelest and deserving-of-human-las-shot factions in the 41st Millennium; Joel defends them with (heretical) explanations and justifications about the nature of their escape from She Who Thirsts. His exonerations for his Tyranid army are no less blasphemous. The Hive Mind is, he says, only acting on its natural need for sustenance. Whatever his justifications for playing such a sinful army, it is clear that he has put a lot of work into it.

Joel’s collection comes to approximately 3476 points total, and it contains models from several different editions of release. To start, here are a few shots of his hormagaunts and spinegaunts. 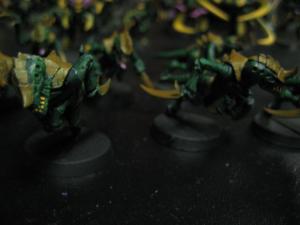 Next, some of those ever important synapse creatures, some of the common Warriors and a couple of Zoanthropes. 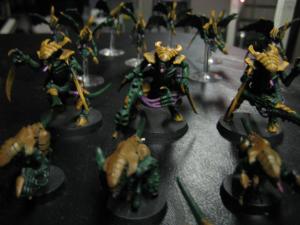 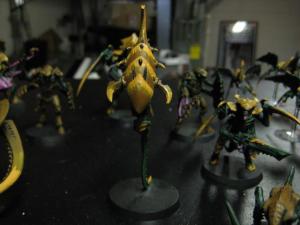 And from days of old comes a terrifying Screamer-Killer Carnifex, a bioform that, as Joel points out, is fantastic under the latest rules.

And also his newer, fully-magnetized Carnifex. 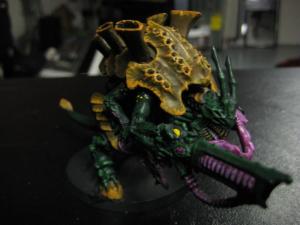 The main body of the horde is backed by fleet units of gargoyles, raveners and genestealers.

Last, but certainly not the least threatening, are Joel’s three Lictors. He is particularly proud of these older – but updated and beautiful – models. 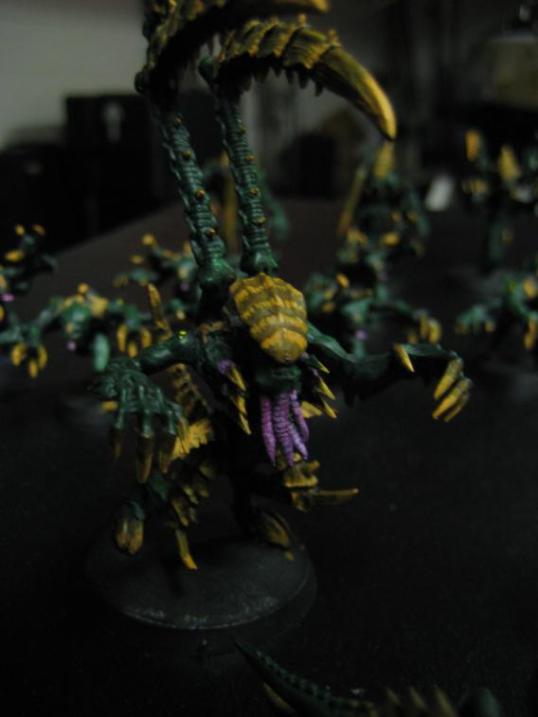 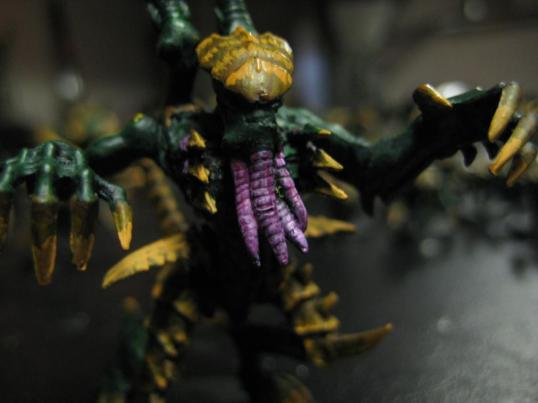 So the question that remains is, of course, did I pack that extra power cell for my lasgun?

This summer has been one of significant progress for me and my model armies. I finished two fantasy armies, finished a Tau Empire force, started an Eldar army, and worked intensely on my Imperial Guard’s overhaul. But as the summer winds down, I am forced to admit that the time has come for me to postpone further progress. On Sunday I head back to college, and I most likely will not make any project advancement until various vacations during the school year. To go out with a blogging bang, I’ve taken a hefty amount of pictures of my Imperial Guard army, which stands currently at 3579 points. Perhaps in the future I’ll write a post concerning the background and fluff of the force, and maybe the army list will also receive some form of publication. For now I will focus on the models.
The Guard army stands approximately half finished. I completed, thanks to the help of brothers and friends, 91 infantry models and 6 vehicles. This leaves 55 infantry models and 8 more vehicles to be painted. My Imperial Guard army is made up of three different sub-divisions. The first and largest is the group of units from the parent regiment(s): the Volyak XXI Rifles and the Volyak XVII Armored. Next are local Planetary Defense Force (PDF) units attached to the Volyak regiment from the Artherian 4th Combined Arms regiment. Last and numerically the least are the attachments from Imperial Command, namely a squad of storm troopers and an operative from the Officio Assassinorium.
Painting wise I started by taking care of all of the PDF units in the force, so we can start there, as well. 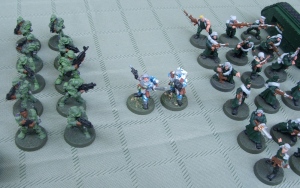 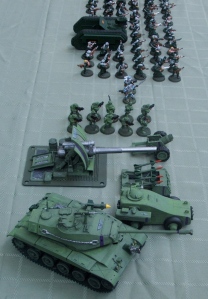 Pictured in some of the images above, too, are the two storm troopers I’ve finished, in a blue and white camouflage scheme.
Out of the regular regimental units we finished quite a lot of the basic infantry, one vehicle and a cyclops demolition team. 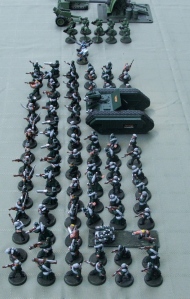 I used this “photoshoot” opportunity to pull out all of my Guard and organize them. It’s a pretty significant force, fit for Apocalypse-sized games (and those are about the only kind that can handle all of those models at once).

Was that an Ogryn Bodyguard back in there? Yes. Yes, it was.