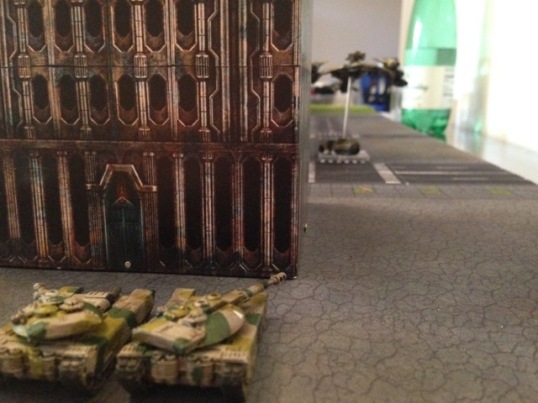 Last week Seb and I got in a game of DZC, around 910 points each side, Feral Resistance versus UCM.  We played the Encroachment mission, but both of us misunderstood the rules about scoring – it wasn’t until we were tallying up the final scores that we realized that infantry in buildings score triple points in the opposite table half, not just the opposite deployment zone.  But because it was equally misunderstood, we decided to just go ahead with our…altered version of the mission (opposite deployment zone only).  (NB: we did not use command cards in this game.)

The buildings were equally balanced (almost exactly) between table halves.  We built army lists that were within 5 points of the other.  The UCM army included:

6 infantry bases in Bears (in Condors);

2 Gladius HBTs in a Condor;

missile pods on everything.

The Resistance force was pretty much my entire DZC model collection:

3 two-base teams of fighters, in Jacksons (in a Lifthawk, with the AA upgrade);

3 Gun Wagons in a Kraken;

Spider mine launchers on the Jacksons. 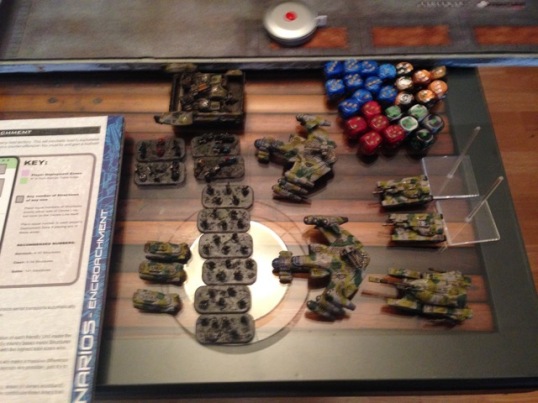 Fortunately, the game was a lot of fun – unfortunately, my picture taking was really spotty.  It’s also been several days since the game itself, so I will summarize. 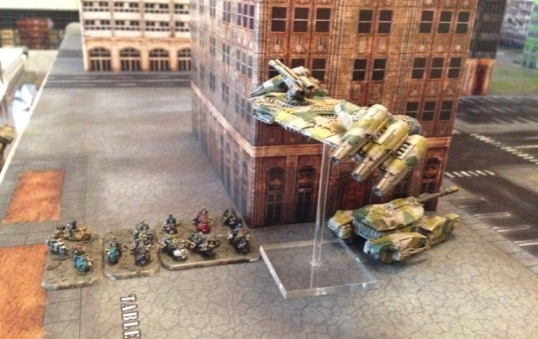 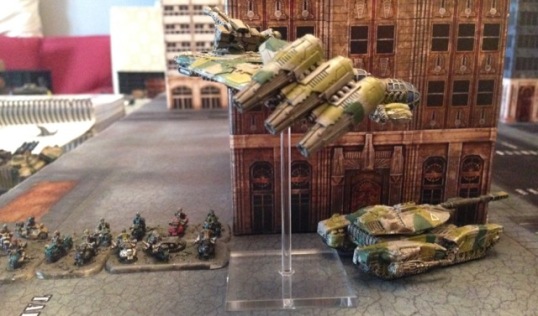 There was no shooting in turn 1.  My command battlegroup deployed on the left side, initially in cover.  This was in direct reaction to his Gladius HBT section, whose Condor dropped them off in the street ahead. 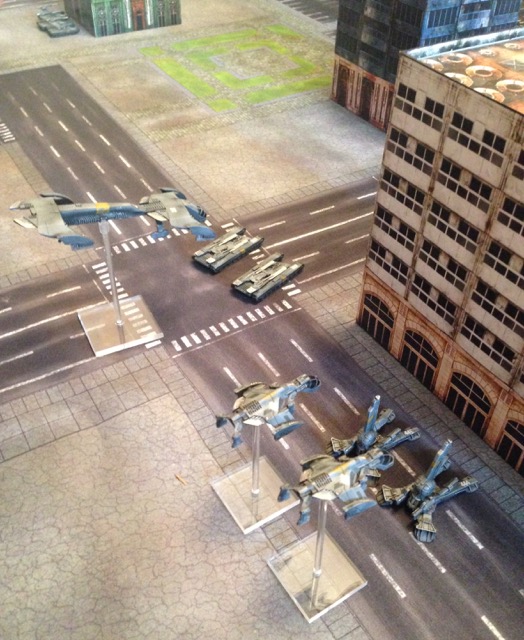 I initially thought this was a clever move – however, over the following several turns, the Alexander moved out of cover and proceeded to do NO DAMAGE AT ALL to anything, and was eventually blown away by the combined fire of the Gladii, Sabres, and even a few blasts from the Kodiak’s friend in space.  I think that happened at the bottom of turn 4. 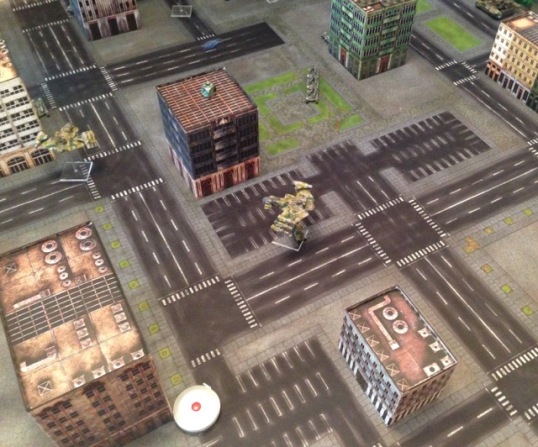 (The tape measure was exactly the same size as the small blast template, which here marks the final resting place of Resistance Commander “CV3.”)

At the time, I thought that would be the end of the game – destroying my most expensive unit and killing the commander within was a mighty chunk of kill points.  However, with so much of the UCM forces concentrating on the exposed Alexander, it allowed for some substantial maneuvering by the rest of my force.  In particular, the Freeriders rode hard down the table edge and found some juicy targets. 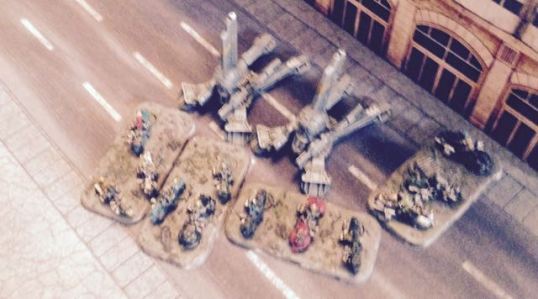 First, they found and destroyed both Longbows in short order.  This had the unpredicted effect of removing the smart smoke on the Gladii.  As a sidenote, Seb and I both had a chuckle out of our representation of the smart smoke: 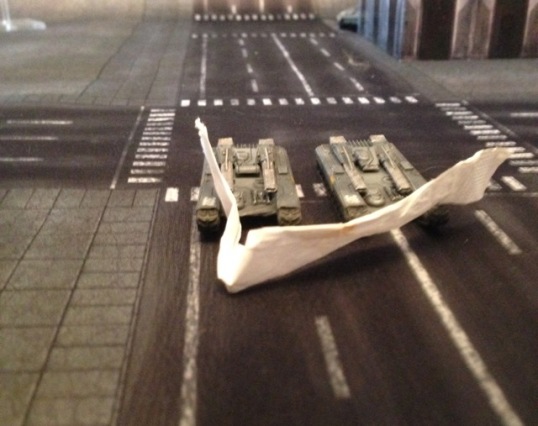 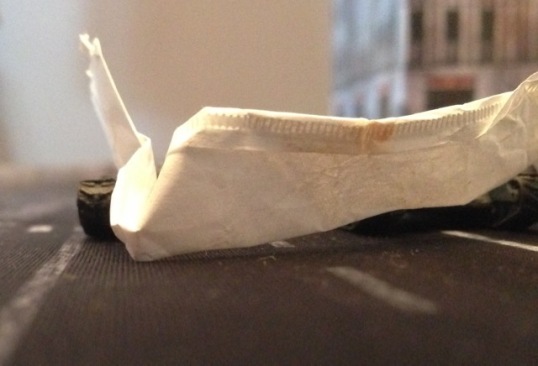 A piece of trash on the ground!  Part of an old straw wrapper one of us tracked in from the street.  It did a good job hiding the heavy tanks from the then-extant Alexander.  Despite the immediate cessation of the smart smoke, the Alexander and some Lifthawk missiles failed to hit and/or damage the Gladii.  Dang.

Anyway, I had originally planned to use the Freeriders to put an end to the heavy UCM tanks, but the destruction of my commander gave me a better idea – go after the Kodiak.  And they did.

Over the final two turns or so, almost the entire UCM army redirected their gatling guns, heavy machine guns, anti-air revolving cannon, and missile pods against the Freeriders.  There were not many other targets, though, and also not enough mobility to get into my deployment zone before the end of turn 6.  Literally thousands of rounds, bullets, and missiles later, Seb’s UCM force had – to their credit – managed to destroy two entire bases of the Resistance scouts.  No easy feat!  This attrition also kept the Freeriders from destroying their target and killing the enemy commander.

On the other side of the board, the UCM Legionnaires had swiftly deployed in a medium building towards the middle of the table – and my own infantry were just too far away to get in the building and engage them without first being subjected to a concerning amount of fire.  Instead, the Lifthawk carrying all thirty Resistance fighters – no doubt airsick by the end of the game – re-positioned and flew across to the other side of the table.  Meanwhile, my Gun Wagons made steady progress in their Kraken, all the way up the far right side of the board.  In turn 6, the Gun Wagons and their Kraken made it into the enemy deployment zone, as did all thirty Resistance fighters, who took up shelter in a large building barely in the UCM deployment area (immediately next to the Kodiak!).  The two Lifthawks also managed to do a little damage, but not enough to earn kill points.  In the end, those infantry won me the game – that triple points bonus is huge. 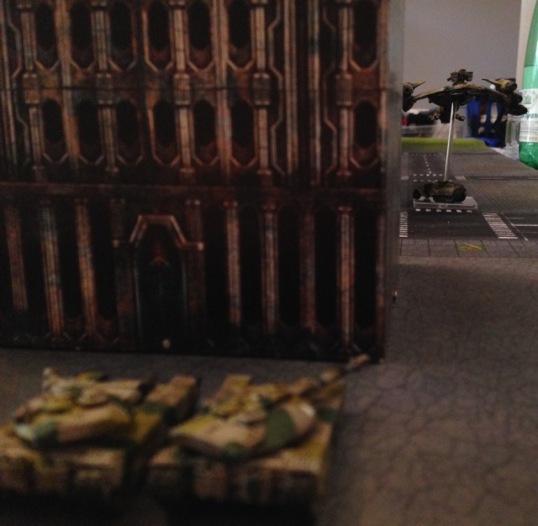 My drive-on Hannibals did not end up achieving very much.  Spending the first turn sheltering behind the large building in the Resistance deployment zone, they ended up driving out and unloading turn after turn on the building the Legionnaires garrisoned.  By the end of the game, the MBTs had killed a base-and-a-half of the UCM infantry, in return losing one of their own to Sabre fire.

Seb and I both agreed after calculating kill points that we would have played the game very differently had either of us realized we had misread/misunderstood the victory conditions for the Encroachment mission.  But it was still a lot of fun!  Had I not thrown those fighters in the building on turn 6, I would have lost.

Besides the actual rules for Encroachment, I felt like I learned a lot in this game.  The Alexander is not invincible, for example (although it did take a lot of pepper to bring it down) – nor are Freeriders (although, again, I love those evasion countermeasures).  I really need a third Lifthawk to get the most out of my heavy armor (and then I could play at the ~1000 points level even).   Lifthawks are not very dependable AA.  Straw wrappers make good smart smoke.