Over the past few weeks I have been expanding my Dropzone Commander Resistance army.

The main additions were the starter army set and a blister of Freeriders, bought on the cheap from Dicehead Games in Cleveland, Tennessee.  I also picked up the Resistance Command Cards set.

Last night I finally sat down and set about washing, cleaning, and building the many units of the starter army.  All came in excellent condition.

I know it is oft said, but the detail on these models is really spectacular.  The Lifthawks are even bigger than I expected, and I really love that the Gun Wagons actually fit inside the Kraken hovercraft.  Well-executed, Hawk. (NB: Pictures above do not include the infantry or Freeriders.  I’m saving them for another date.)

Today I finished painting the Jackson Halftrack APCs (unit name: the Jackson Park Express).  I also settled on a marking scheme for my force, and added it to the Alexander Command tank featured in the last post. 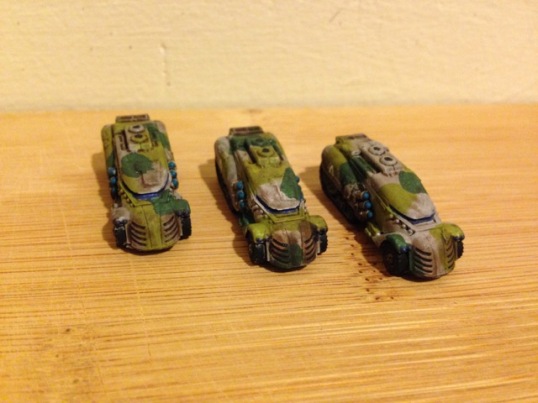 Make sure you take a look at those undercarriages – very detailed!

I am enjoying the rapid painting progress with this color scheme.  I have not sealed any of the models yet, and may revisit them if I decide to change something, but I am still feeling satisfied with the messily applied camo scheme, offset by almost-subtle detail work.

I am looking forward to getting some games in before too long, too!