Our secret project continues… A Necromunda campaign, but not set in the great Hive City.  I’ll be parsing out the information piece by piece.  First up – background and setting!  Enjoy it!

In a remote corner of the Imperium sits Roshan, slowly turning on its axis as it orbits a pale yellow sun.  Several years ago, this once-thriving human-settled planet was the setting for invasion and counter-invasion, and, although humanity has endured, there was great destruction.  Once classified as a sub-hive world, Roshan is now a wrecked world, albeit teeming with human – and other forms of – life.

The second-largest city, formerly close to becoming a Hive city in itself, is a large metropolis.  This city, Cleora, is a study in contrasts.  Entire districts were laid waste by the war while others barely felt the steely caress of combat.  Blocks of rubble and broken habitation structures neighbor resilient, impressive neo-gothic architecture.  Some parks and gardens were tilled with bullets and shells while others never missed the care of warm human hands.  Museums were wrecked by the siege, while art galleries stood inviolate.  And still to this day millions live in Cleora, building new lives among the ruins, or finding new ways to survive in the old, maintained districts.

While much of this city survived, the one thing that did not was Imperial government.  Cleora is a wasteland, speaking about its political systems and authorities.  While the inner city – First District, also called Tepatica – survives as it has for hundreds of years, it does so behind twenty-five foot walls of thick, reinforced rockrete.  Plasteel and ceramite blast gates were shuttered during the war and never reopened.  The refugees who came into Cleora to escape the war were shut out from the protected inner city, and left to face the war in the rest of the urban jungle.  Now, Tepatica lives on, a self-contained, cut-off bulwark of Imperial elites.  Perhaps someday they will reconnect to the wider Imperium of Man.  But for now, the outer districts of Cleora are left to fend for themselves.  People there have been struggling to rebuild, to grow and scavenge food stuffs and medical supplies.

Years have passed since the war, and although the outer districts are home to many small families, many gangs and many creatures, a few rising powers vie for control.  These three powers have overseen the slow but steady development of mining, manufacturing and medical operations in the rejected wastes of the city.  Capitalizing on every advantage they can, they have expanded their influence over lesser gangs and over many different territories across the war-ravaged metropolis.  Skirmishes between these factions have become daily events, sometimes even involving each of the major clans as well as lesser ones trying to make their own grabs for power or resources in Cleora. 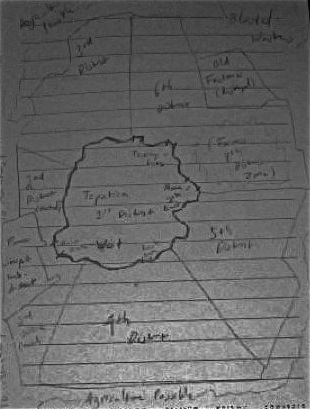 In the grim darkness of the far future, there is war.  But for now, for the people living in the outer districts of Cleora, there is also hope – hope for a return of prosperous times.  How will you assure it for them?

I claim copyright for original work above: © Ian Cross 2013