You may remember the Shadow of the Kabal of the Twilight Wraith, a Dark Eldar army by my friend Joel Williams that we posted a gallery of a while back. You may, too, remember the mention of a discussion Joel and I have often held: I, as an upstanding defender of the Imperium, see the wicked xeno pirates as one of the cruelest and deserving-of-human-las-shot factions in the 41st Millennium; Joel defends them with (heretical) explanations and justifications about the nature of their escape from She Who Thirsts. His exonerations for his Tyranid army are no less blasphemous. The Hive Mind is, he says, only acting on its natural need for sustenance. Whatever his justifications for playing such a sinful army, it is clear that he has put a lot of work into it. 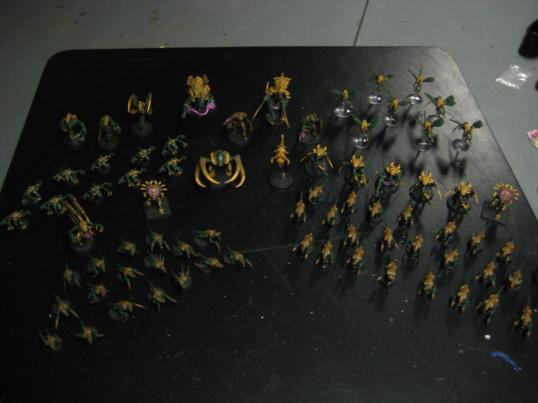 Joel’s collection comes to approximately 3476 points total, and it contains models from several different editions of release. To start, here are a few shots of his hormagaunts and spinegaunts. 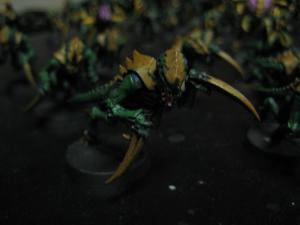 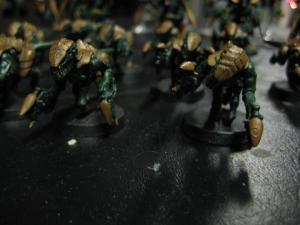 Next, some of those ever important synapse creatures, some of the common Warriors and a couple of Zoanthropes.

And from days of old comes a terrifying Screamer-Killer Carnifex, a bioform that, as Joel points out, is fantastic under the latest rules.

And also his newer, fully-magnetized Carnifex.

The main body of the horde is backed by fleet units of gargoyles, raveners and genestealers. 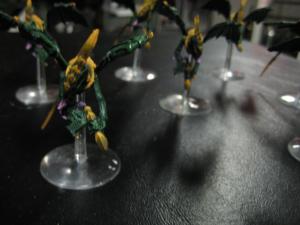 Last, but certainly not the least threatening, are Joel’s three Lictors. He is particularly proud of these older – but updated and beautiful – models.

So the question that remains is, of course, did I pack that extra power cell for my lasgun?

4 responses to “Tyranids: even if they bleed, can we kill them?”