If you ever need a description of why the Dark Eldar aren’t really “that evil,” just talk to Joel. If you ever want to see a well-painted Dark Eldar force, see him for that, too.

His army is situated around a few Warrior Squads backed up by more warriors entering from Webway Portals – just at the right moment to jump into your gunline.

His other units include some Warp Beasts, some Wyches, and a hard-hitting Reaver Jetbike squad led by a fierce Dracon.

Generally at 2000 points, Joel runs the character on the jetbike as a Dracon, and his on-foot leader as an Archon. The high number of raiders, alongside the jetbikes and webway portal, assures that this army list is extremely fast and hard-hitting. The HQ unit he runs is the Archon (High Lord Archon Khira’lyth, wouldn’t you know) backed up by wicked Incubi. Anti-armor firepower is provided by a Ravager with Dark Lances. 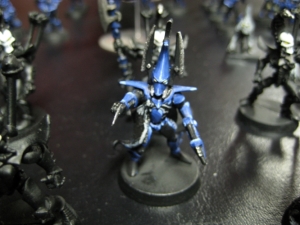 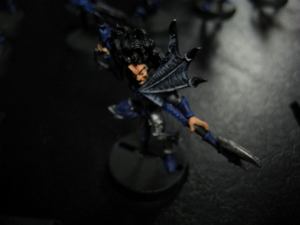