Dreadnought. From the moment I first saw this game, I knew I wanted to play Space Marines because of them. Sure the Imperial Guard has two legged walkers that look like something out of Star Wars, but they just don’t scare me. These did. And as I feel it’s important to have a large piece in your army, this was it. (Wait until you see the girlfriend’s Tyranid army… it’s got a nice centerpiece as well.) Sure, I could have used a Rhino transport for the troops, but enemies don’t fear a Rhino. They fear firepower, and the Dreadnought brings it.

So, as I’m getting ready to paint this model, I think, “This would make a perfect post.”

And with that setup, here it is, mostly assembled and unpainted.

Now, I wasn’t smart enough to take a picture with another piece to show scale, but it’s about twice as tall as a normal Space Marine. I’ve left the arms off on purpose, because I’m going to paint all his weapons and swap them out as my army list changes. The final two pictures are the back and the model with arms on. I should have it basecoated later today and I will include pictures in tomorrow’s post. 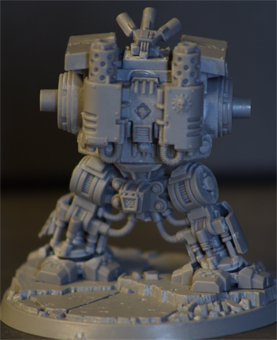 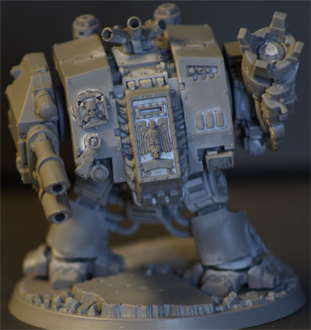